Yuri Isuzu is a supporting character in Girls und Panzer. She is the mother of Hana Isuzu and a practitioner of Ikebana.

Yuri Isuzu is the mother of Hana Isuzu, and she hails from a family which has performed flower arrangement for a long time. She is, to all effects, a yamato nadeshiko, the "personification of the ideal Japanese woman"

Yuri appears in Episode 4 after Ooarai's match against St. Gloriana, meeting her daughter with her friends while they are on the mainland shopping. After Yukari Akiyama accidentally revealed they had performed a Sensha-dō match, she had a fit and fainted on the spot. After having regained consciousness, she argued with Hana and urged her to renounce to Sensha-dō, showing a profound dislike of tanks (to the point of stating that they should all be turned into scrap iron); when she refused, Yuri ordered her daughter never to set foot again in the house.

Arguably due to persuasion from the family servant Shinzaburo, she went to Ooarai's match against Pravda.

Yuri finally reconciled with her daughter in Episode 10; during a flower arrangement exposition, she approached Hana and commended her arrangement, stating that, while Hana's approach was different than her own, her style now possessed a strength and individuality that she never showed before, thus coming to terms with her Sensha-dō activity. She then assisted to the Finals together with Shinzaburo, and was later seen at Ooarai's victory parade.

Yuri is a traditional woman in both appearance and behaviour, and shares with her daughter her calm and gentle demeanor.

However, Yuri has a huge flaw: she tends to be quite narrow and obstinate in her views. When Hana told her she had taken up Sensha-dō, she expressed disbelief and pure horror at the notion that her hands has been used to steer a 'loud, ugly and crude' tank. She also dismissed the notion that Sensha-dō might help Hana come up with a stronger style, describing her previous work as perfectly clean and ordered. When her daughter stated that she couldn't give up Sensha-dō, Yuri all but ordered her never to return.

Yuri later reconciled with Hana and her decision, being impressed by how it allowed her to gain a new sense of strength and individuality in her flower arrangement style. 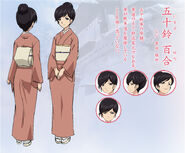 Yuri Isuzu's official character sheet
Add a photo to this gallery
Retrieved from "https://gup.fandom.com/wiki/Yuri_Isuzu?oldid=67705"
Community content is available under CC-BY-SA unless otherwise noted.