"1 Chi-Ha and 1 ShinHoTo got taken out!"
―Kinuyo Nishi

The Type 97 Chi-Ha (九七式中戦車 チハ Kyūnana-shiki chū-sensha Chi-ha) was a Japanese medium tank of World War II in the Pacific. Due to its extensive service, it often considered to be the Japanese main battle tank of the conflict. In the anime, it first appeared in Girls und Panzer der Film.

As the Type 89B medium tank was becoming obsolete by the mid-1930s, the Imperial Japanese Army began to develop a design that could replace it. Also profiting from the experience with the Type 95 Ha-Go light tank, a prototype was completed by 1937, but it had a competitor in the form of the smaller and less expensive Chi-Ni prototype; however, as the prototypes were being confronted, the war in China began, which led to more funding available for the IJA, therefore the more performant Chi-Ha was selected as the Type 97 medium tank.

The Chi-Ha had a hull of riveted construction, with a conspicuous circular radio antenna around the turret, designed for a crew of four: commander and gunner/loader in the turret, driver and radio operator/bow gunner in the front. It was primarily designed as an infantry-support tank, as demonstrated by its low velocity 57 mm gun (with no elevation gear) and its relatively thin armor (a maximum of 25 mm frontally). A total of 1'162 tanks were produced from 1938 to 1943.

Its initial deployement to China was successful, with the tank outperforming the few Chinese German-made Panzer Is and Italian-made CV.33s; however, during the engagements against Soviet forces in 1939, the tank gun proved to be relatively ineffective against the Soviet tanks. This issue was repeated when, during the war in the Pacific, the Chi-Ha met American tanks such as the M3 Stuart or the M4 Sherman, which could easily outperform it while being invulnerable to its 57 mm gun. Despite its increased obsolescence, the Chi-Ha continued to operate to the end of World War II.

The need for a more powerful tank led to the development of the improved Type 97 ShinHoTo Chi-Ha (or Type 97 Kai).

Proven to be inferior to it's Soviet rivals (such as BT tanks and T-26 that can easily out-range Japanese tanks with their 45mm gun) during the Nomonhan Incident of 1939, because of its thin armor and weak low-velocity 57mm gun. In 1940 a program to introduce a new tank armed with the new Type 1 47mm gun was launched, which would lead in to the Type 1 Chi-He medium tank in 1943. However the Philippines campaign urged the need for 47 mm tanks, some Chi-Ha tanks were retrofitted with the turret of the Chi-He, this conversion proved successful and also less costly than the new tank. Therefore, until 1943 the Chi-He was not produced (and nearly none of the 170 tanks build saw any combat as they were reserved for the final defense of Japan), with the Type 97 ShinhoTo Chi-Ha (ShinhoTo meaning "New Turret") being given precedence.

The ShinHoTo Chi-Ha was basically a Chi-Ha with a larger, three-man turret that housed the 47 mm gun. The rest of the hull remained basically the same as the older tank. Almost a thousand tanks were built or converted from 1942 to 1945. The ShinHoTo Chi-Ha was a definite improvement in terms of firepower over its predecessor, in fact this was arguably the best Japanese tank used operationally (since other, more powerful tanks such as the Type 3 Chi-Nu, were never deployed on the field). However, it was still outclassed by foreign medium tanks such as the M4 Sherman and the T-34.

The Chi-Ha makes only a small appearance in Episode 6, showing the aftermath of the match Chi-Ha-Tan vs Kuromorimine. Because of Chi-Ha-Tan's obsession with charges, they tried this against KMM and got slaughtered. According to "Gekkan Senshado Magazine" they fielded four regular Chi-Ha and five Shinhoto during the match.

During the compound match Chi-Ha-Tan fields seven Chi-Ha (four regular & three ShinhoTo). At the beginning they cornered St. Gloriana's Churchill & three Matildas into a sand bunker on a Golf field. After two Matildas being taken down, all Chi-Ha tanks "Charge !!!!" to the bunker to take down the Churchill but it was a short-lived victory as all Chi-Ha (except Kinuyo Nishi's one) were taken down by the Churchill and the remaining Matilda (like what they never learn from their mistakes). After Ooarai/Chi-Ha-Tan defense line in the city being broken by Pravda tanks, they proceed to retreat. But Nishi's radio being broken she miss the retreat order, Duck Team tried the warn her but she's misread on Akebi and Noriko's lips "Retreat" to "Charge !!!". But calmly charges to Pravda tanks and gets shot by Nonna's IS-2.

During the match against the All-Stars University Team, she tried to bring twenty-two tanks (twenty-one Chi-Ha including fourteen regulars & seven Shinhoto) to help Ooarai but she misunderstands Darjeeling message which was that they'll bringing twenty-two tanks in total all schools combined, in the end she only kept three regular Chi-Ha (Nishi, Hosomi & Ikeda's) and two Shinhoto (Tamada & Hamada's), the five Chi-Has (plus the Ha-Go) are assigned to Morning Glory Team under the command of Kay and Nishi. Ikeda's Chi-Ha & Hamada's Shinhoto are taken out by Rumi's Company Pershings in the forest. In the amusement park two Pershings are shot down by Tamada's Shinhoto and Hosomi took down one Pershing whose gun was immobilized by the Type 89B and the Ha-Go. They met the demise when they tried to "Charge !!!" Alice's Centurion alongside the Type 89B and the Ha-Go and they were ripped apart by the Centurion in less that one minute. 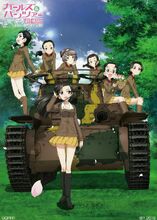 Nishi and her twenty-two Steel Lions

Night.
Add a photo to this gallery
Retrieved from "https://gup.fandom.com/wiki/Type_97_Chi-Ha?oldid=66019"
Community content is available under CC-BY-SA unless otherwise noted.