While the students are enthusiastic, they are inexperienced, quite clumsy and rather mediocre at shooting. They will rather improve later under Shizuka Tsuruki's guidance.

One of the school's speciality is the making of Thanaka cosmetics in powder or paste form. It is worn by the students on their faces or sold to raise funds.

All tanks they have are only other schools' unwanted leftovers such as the Type 95 Ha-Go.

As they are a newly formed team, they haven't any particular tactics.

If they have one their schoolship's appeareance is unknown.

Tategoto's uniform consists into Thanaka on their face, a white shirt with Tategoto's logo on the shoulder, black shorts and sandals.

Little is known about it's past except that the school may have been under St. Gloriana's guidance since Aung mentioned they manage to gain their independence from them and that permit them to resume Sensha-dou.

But gaining it's independence has it's drawbacks since they have no funds. Aung and the rest of the team tried to earn funds through Tankathlon matches.

Tategoto got their first match and first desillusion against Bonple High School as they pay the high price for their inexperience and they were mercilessly beaten to the ground by the ruthless Jajka.

Tategoto girls were heavily discouraged by this humiliating defeat but regain some courage by teaming up with Centipede Team against Anzio Girls High School. However Shizuka's price to participe alongside them is if they lose their Sensha-do club will be disbanded. On this match Tategoto fielded ten Type 95 Ha-Go with Centipede's Type 97 Te-Ke.

They improved a lot on this fight managing to shot down some tankettes. They were in high spirit, Shizuka proposed to act as a bait to permit Aung-san and his tank to rush on Anzio's flag tank. But Tategoto's high spirit was short-lived as they falled into Anchovy's trap and were slaughtered by a CV.33 tankette armed with a 20mm AT gun.

From this defeat Tategoto's Sensha-do club was disbanded only to be reformed in the mud.

In the first round Tategoto went up against Maho Nishizumi, whose team had been rechristened Nishizumi Mask by Darjeeling, in a 5v1 battle. Despite having their machine gunners dismount and act as observers to direct their tanks in order to trap Maho, they were knocked out in rapid succession with such speed that Aung never even saw her before the match ended.

Tategoto High School has only one character of note.

She's is the overall commander of the newly restored Tategoto High School Sensha-do Team. She appears in all occurrences of Tategoto High in the Ribbon Warrior Manga. 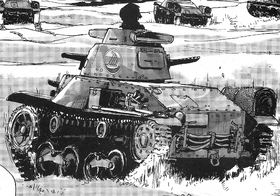 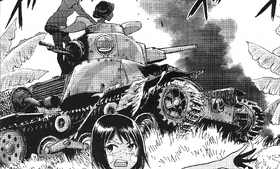 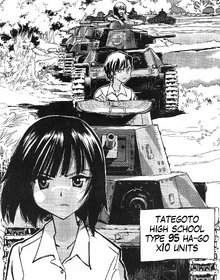 Aung and her teammates.

Add a photo to this gallery
Retrieved from "https://gup.fandom.com/wiki/Tategoto_High_School?oldid=63632"
Community content is available under CC-BY-SA unless otherwise noted.