"We will fight in Tankathlon!"
―Shizuka Tsuruki

Tankathlon is an unofficial form of martial arts, like Sensha-do it uses tanks as weapons, however it lacks Japan Senshado Federation's (JSF) regulations and approval rules, traditionalism and values of it, which makes it marginalized among senshado practitioners and seniors. It involves two opposing teams, each possessing their own set of tanks, combating in Flag Battle matches, the only type of match known for now. During the first Tankathlon matches bogus tanks were used.

Many school carriers senshado teams are adopting tankathlon for various reasons, which are: lack of a big arsenal, practicing matches, different in-battle challenges, interest in this type of setting.

While some schools use their real name in tankathlon, other more prestigious schools practice under an alias so as to not compromise themselves in an unofficial sport.

As tankathlon is unconsidered by the JSF, it has its Tankathlon Committee, they are responsible to set the opponents, the matches' date, place and any other matter involving the event, however, unlike JSF they will not cover the costs for repairing the damages caused to structures or viewers and others conditions included in Senshado Competition Regulations.

For now, there is only one known rule, where the tanks' weight must be below 10 tons, limiting the battle for light tanks and tankettes only.

The lack of rules allows the matches to unofficially happen anywhere, both in rural settings, where viewers can stay in the middle of the battlefield watching if they want and in urban areas, where the citizens/viewers are in the middle of the match. It is the total responsibility of the viewers to ensure their own safety against being hit by a tank or shells.

Tank shops only sell products sanctioned by the Senshado Federation, when Rin and Shizuka go to buy some equipment so they can upgrade the Type 97, Rin doesn't find anything related to tankathlon. However, Shizuka demands for the shop owner to provide tankathlon materials and supplements, he then leads them to the basement of the shop with a huge area dedicated to tankathlon. The shop owner also explains the JSF is being annoying regarding tankathlon materials lately, implying that the JSF heavily regulates the materials and equipment used in Sensha-do as a whole. It is unclear whether all tank shops have similar hidden stashes or limited to some particular shops.

The Cauldron is a Tankathlon Tournament organized by Darjeeling.

Shizuka and Rin at a tankathlon shop. 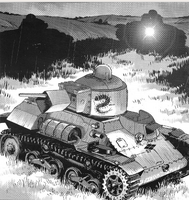 Shizuka and Rin on the Type 97 and their flag symbols. 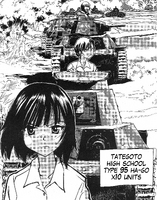