In the autumn of 1943, the design bureau of the Stalin Ural Tank Factory No. 183 located in Nizhny Tagil started working on a vehicle that would have improvement opportunities in the future, under a direct order from Stalin.

Main parameters for the project: retain the high mobility of the T-34 and provide it with heavier armor protection against modern tank guns. In November of 1943, the chief designer, A. A. Morozov, presented the overall design and a model of the tank which received the designation Object 136.

The first prototype was completed by January 1944, and two more were completed in February. The first two prototypes received the designation T-44-85 (as they were armed with 85 mm D-5T guns). The third prototype was armed with the 122mm D-25-44T tank gun and received the designation T-44-122. The D-25-44T tank gun was a development of the basic D-25T tank gun, but there were differences in some minor details; fixed single-piece ammunition to increase the rate of fire, and a double-baffle muzzle brake.

The construction of the hull with an innovative placement of the engine allowed fitting such powerful armament in a medium tank weighing 30 tons. The engine of the T-44 was placed perpendicular to the axis of the tank. All three prototypes were powered by the V-2IS diesel engine which developed 500 hp (373 kW).

The first trials of the T-44-122 prototype took place in February and March 1944, but were unsuccessful due to gun failure. Aside from standard trials, the T-44-122 was put in competitive trials against the captured German Panzerkampfwagen V Panther medium tank and the second of two first-generation T-44-85 prototypes. However, the practical rate of fire was limited to only two to three rounds per minute due to the cramped turret and long, heavy ammunition. In addition, the vehicle had a very limited stowage of only 24 rounds and this was considered insufficient for a medium tank. As a result, all further development of the T-44-122 prototype was canceled.

The third generation prototype, which received the designation T-44A and was completed after the Morozov Design Bureau had moved back to Kharkov in the Ukraine. The hull upper front armor (glacis plate) thickness was increased to 90 mm and the turret front armor thickness was increased to 120 mm. Even though it was more heavily armored, the weight went down to 30.7 tons. This vehicle also had a new V-44 12-cylinder 4-stroke diesel engine of 520 hp (388 kW) at 1,800 rpm, which allowed the tank to travel at a speed of 60.5 km/h. This prototype had the splashboard on the glacis plate like one of the second generation T-44-85 prototypes. After trials conducted in August and September 1944, and after it received several upgrades (which increased the weight of the vehicle to 32 tons), the T-44A officially entered service with the Red Army on the 23rd of November 1944.

The T-44 was issued to three tank brigades mustered on September 15, 1944, for training purposes, but these formations were re-equipped with T-34-85 medium tanks prior to entering the Battle of Berlin and the Prague Offensive. These were the 6th Guards, 33rd Guards, and 63rd Guards Tank Brigades. The T-44A medium tank was not used operationally during WWII in Europe for several reasons, including the fact that the Red Army wasn't ready to accept a new tank due to lack of sufficient supplies and technical specialists who could repair and maintain the new tanks as well as many of the tank crews were inexperienced. However, three tanks were sent to the 100th Special Tank Company, which tested them on the Eastern Front. Many T-44A medium tanks were sent immediately after they were produced to the Far East regions of the Soviet Union. The first tanks arrived before the end of the war and were used operationally during the last three days of fighting. They continued to arrive after the war and eventually, around 600 T-44A medium tanks were stationed there.

Due to the Cold War, the USSR decided to keep the tank secret. It was never shown publicly during military parades and all pictures of it were never shown publicly until the coat of secrecy was dropped. Also, theres almost no photographic evidence of T-44s stationed in East Germany or during the Soviet invasion of Hungary in 1956, although it is known that T-44s were sent there (there's only one photograph of a T-44A medium tank in Hungary in existence).

Some T-44A medium tanks were later given to military museums, including one in Brest in today's Belarus. One of two T-44-100 prototypes can be found in the Kubinka Tank Museum.

T-44 was one of the tanks purchased by the Kashiwaba Sisters, alongside the Elefant, Jagdpanther and Panzer II, at Emi Nakasuga's request. The tank was assigned to Youko Minami and her three friends Saionji, Azuma and Hokuto.

The T-44 was fielded by Bellwall during the challenge match against West Kureouji Grona Academy. During the match it was shown to stay close of the Tiger with the Panzer II, it manages to shot down a Matilda but its victory was short lived as it was destroyed by a powerful rear shot from the Black Prince.

The T-44 was again fielded during the Commemorative Cup first round match against Gilbert High School. As the match is unseen its role during the battle is unknown.

The T-44 was lastly fielded during the Commemorative Cup repechage match against Ooarai Girls Academy. During the match it paired with the Tiger and the Jagdpanther on a highway interchange persuing the Panzer IV, but when Miho's tank jumped from one interchange to another, the two tanks reach the highway to realize in terror that nearly all Ooarai tanks were waiting.  The unlucky tank was immediately destroyed by a fierce barrage fire. 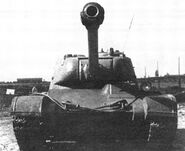 T-44 is exposed against Kuromorimine.

T-44 is exposed against Ooarai.
Add a photo to this gallery
Retrieved from "https://gup.fandom.com/wiki/T-44?oldid=64079"
Community content is available under CC-BY-SA unless otherwise noted.