"Be elegant at all times"
―Darjeeling

St. Gloriana Girls College (聖グロリアーナ女学院) is one of the schools in Girls und Panzer. The school operates British World War Two tanks including the Matilda, at least one Churchill Mk.VII and the Crusader.

St. Gloriana is a school located in Yokohama City, Kanagawa Prefecture, Japan. St. Gloriana is a rich, refined school with well groomed students. They have been known to consume tea and cakes even during Sensha-dō battles.

It is a very famous and privileged school, with Sensha-dō as a major part of the school's culture. The school Sensha-dō team is a serious threat in the field, however, it has traditionally been marginally weaker than the likes of Kuromorimine and Pravda, its key opponents. As a result of this, it has been a long time since the school last won the national championship.

A lot of the school's funds come from alumnae donations. This also means the graduates ended up influencing tank selection, hence their conservative tank selections despite their wealth.

The school has a very stringent selection process to even be enrolled. Students aim to become a part of the "Tea Garden", the building wherein gather the best of the best students in grades and behaviour. These elite students are trusted by all and given soul names of teas.

After graduation, the Tea Garden members join one of the three major factions of the alumnae organizations, and they run regular meetings to oversee how their school should be run, especially on how the next generation of Sensha-dō leaders is to be chosen.

St. Gloriana is occasionally known to host tea parties for highly respected peers. It also has a tradition of offering tea as a gift to opponents, usually individuals, who they deem worthy.

The Sensha-dō uniform consists of a black skirt, high black boots and a red coat complete with gold buttons and shoulder epaulettes, resemblant of the uniform of the Queen's Guard.

The hallmark of St. Gloriana's style is elegance. In battle, their tanks match speeds, drive steadily, flow smoothly between formations and fire in synchronised volleys. Great significance is placed on remaining calm and composed at all times, never becoming panicked or flustered.

When on the attack, St. Gloriana primarily make use of marching fire in a slow but steady advance. They generally maintain formation whilst attacking and make few attempts to evade enemy attacks, mimicking the tactics of infantry support tanks during WWI. If pushed onto the defensive, St. Gloriana prefers static defensive postures, also preferring to use terrain features to enhance their survivability as opposed to relying on their tanks' armour.

St. Gloriana Girls College was chosen to be Ooarai Girls Academy's first opponent for an annihilation-style exhibition match. St. Gloriana held the upper hand the entire match, primarily thanks to the inexperience of Ooarai's members causing them to fumble the initiative. Although Darjeeling was confident of victory throughout, they received a nasty surprise from the unexpected capability of Ooarai's Panzer IV crew. Although heavy losses were suffered, St. Gloriana emerged victorious regardless. After the match, their overall commander, Darjeeling, complimented Ooarai's overall commander, Miho Nishizumi, as a worthy opponent by giving them tea as a gift.

St. Gloriana's first match of the 63rd National High School Sensha-Dō Tournament was against BC Freedom High School, where they fielded their Churchill and 9 Matildas. BC Freedom had recently upgraded their Sensha-dō force with some heavier vehicles, and also managed to claim the more advantageous position first. St. Gloriana nonetheless made a slow but graceful push through BC Freedom's defences, overcame a trap that had been laid for them, and destroyed the enemy flag tank.

In the quarter finals, St. Gloriana employed the same lineup against Yogurt Academy. Yogurt was able to reach the hill before St. Gloriana, but Darjeelings tactics were able to repeatedly blindside them and prevent them from fully exploiting the position. St. Gloriana's tanks were able to ascend the hill themselves and forcefully dislodge the enemy through direct assault. Yogurt's heavier equipment inflicted greater losses than in the previous match, but the skill of St. Gloriana's members eventually defeated them.

St. Gloriana faced the previous year's runner-up in the semi-finals, Kuromorimine Girls Academy. St. Gloriana fielded their Churchill Mk. VII as their flag tank, eleven Matilda IIs, two Crusader Mk. IIIs and a Cromwell Mk. VII. St. Glorianaa were placed on the back foot early when Kuromorimine exploited their superior range. A screen of dust was used to cover the main force as it moved across open ground, but when they reached a hill in the centre of the battlefield, they found that once again their opponents had arrived first. The first of a pair of pincers by the enemy was swiftly destroyed, and the second was kept momentarily preoccupied whilst the Churchill scaled the hill and challenged the enemy Tiger I to battle. However, Assam was unable to immobilised the enemy flag tank before its reinforcements arrived. The Churchill was knocked out, eliminating St. Gloriana from the tournament.

After the conclusion of the tournament, Ooarai held a compound team exhibition match in Ooarai city. St. Gloriana teamed up with Pravda Girls High School and entered the match against a joint team from Ooarai and Chi-Ha-Tan Academy. St. Gloriana fielded four Matilda II Mk. III/IVs, four Crusader Mk.IIIs and a Churchill Mk.VII, which acted as the flag tank. An early deployment error left the Chruchill and its escort surrounded with allied forces scattered across the battlefield, but St. Gloriana's tanks were able to hold out until the rest of their team could return and join the fight. Following that, St. Gloriana's infantry tanks stuck close to Pravda's main forces whilst their Crusaders hunted down the ever-elusive enemy flag tank. Although the Churchill was eventually rendered the only remaining St. Gloriana vehicle on their team, it managed to lure the enemy into a trap set by Pravda tanks. The St. Gloriana - Pravda Compound Team won the battle after Anglerfish Team missed a potentially-match-winning shot on the Churchill, and Assam landed a direct return hit.

When news got out about Ooarai Girls Academy being unjustly decommissioned unless they could win an annihilation match against a team of thirty tanks from the All-Stars University Team, Darjeeling sent messages out to all different schools practicing Sensha-dō, requesting they join the fight to save the school. St. Gloriana themselves brought one Matilda II Mk.III, one Cruiser Tank Mk. VI Crusader Mk.III and a Churchill Mk.VII. All three tanks were initially attached to Team Dandelion, under company commander Darjeeling.

In the battles in the amusement park, the Crusader Mk.III acted as bait to lure enemy Pershing tanks into ambushes set up by Hippo Team.

Late in the match, the Churchill Mk.VII took part in a plan to overcome the impenetrable armour of the T28 Super Heavy Tank. Whilst the T28 was crossing a bridge, the Firefly destroyed a section of the bridge under the T28. The Churchill angled up against the bridge supports to fire up into the underside of the T28. This hit the weak point in the armour that had been determined due to Assam's extensive intel gathering. However, whilst their objective was completed, this position left the Churchill trapped and it was subsequently taken out.

Further on, the Matilda II was immobilized whilst attempting to ram the tanks of the Bermuda Trio.

In the closing stages of the match, the Crusader Mk.III, commanded by Rosehip, fought a high-speed duel with the All-Stars University Team's last remaining Chaffee. Rosehip eventually removed the speed governor on her tank, breaking the tank's operational speed limit and jumping her tank across the river to fire into the Chaffee from point blank range. Unfortunately, such an extreme manoeuvre also resulted in the immobilisation of Rosehip's tank.

Her hometown is Kanagawa Prefecture, Yokohama City. The overall commander of St. Gloriana Girls College Sensha-dō team. She is a calm and well spoken leader who often speaks in quotes and riddles, much to the chagrin of both her opponents and her own team.

Her hometown is Kanagawa Prefecture, Yokohama City. The gunner of the team's Churchill Mk. VII. She is shown to be very calm and silent and is sometimes seen with Orange Pekoe along with Darjeeling. She heads St. Gloriana's intelligence system, and is very good at compiling information.

Her hometown is Kanagawa Prefecture, Yokohama City. The loader of the team's Churchill Mk. VII. She is commonly seen with Darjeeling as they observe Ooarai's matches.

Her hometown is Kanagawa Prefecture, Yokohama City. The Commander of the team's Crusader Mk. III Tank. She makes her first onscreen appearance during Girls und Panzer der Film. Befitting of her tank, she has an obsession with speed, and is hasty to the point of being foil to the elegance of her three superiors.

Her hometown is Kanagawa Prefecture, Yokohama City. The Commander of one of the team's Matilda II Tanks (number 05). Before she was formally given a name she was given the fan nickname "Ushiroda" based on her memorable encounter with Duck Team in Ooarai's first match.

Her hometown is Kanagawa Prefecture, Yokohama City. Supposedly a newer addition to the Sensha-dō team, she has been seen in command of both a Matilda and a Cromwell. She is often depicted as the first casualty in each of St. Gloriana's matches.

She is the former commander of St. Gloriana. She is a promotional character and made a stealthy appearance in Little Army 2 Chapter 4 in Kilimanjaro's flashback. She appears to have commanded a Cromwell Mk.VII. She inspired rosehip to take up senshadou after watching her during one of her matches.

Mentioned by Rosehip during a friendly match against Ooarai & Chi-ha-Tan Academy, Cranberry uses a Crusader Mk.III.

Mentioned by Rosehip during a friendly match against Ooarai & Chi-ha-Tan Academy, Vanilla uses a Crusader Mk.III.

Mentioned in the St. Gloriana novel, Ruhuna is the driver of the Churchill Mk.VII. 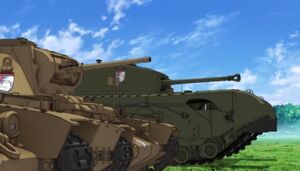 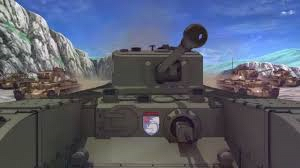 Churchill Mk.VII with Matildas in Formation. 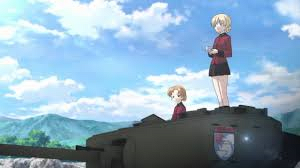 Darjeeling standing on the turret of the Churchill. 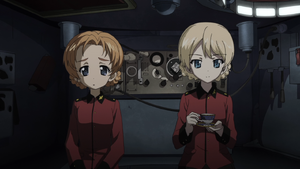 Orange Pekoe and Darjeeling inside the Churchill, Darjeeling drinking tea as usual 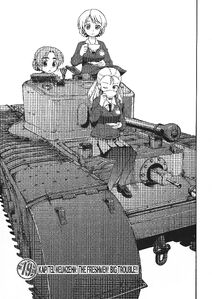 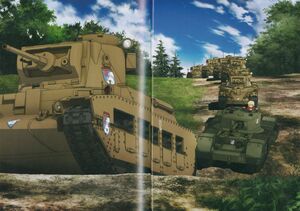 St. Gloriana column advancing during the match against Kuromorimine
Add a photo to this gallery
Retrieved from "https://gup.fandom.com/wiki/St._Gloriana_Girls_College?oldid=75801"
Community content is available under CC-BY-SA unless otherwise noted.