"Kept you waiting, huh?"
―Ogin to the rest of Ooarai Teams right after Shark Team arrival on the match field

Shark Team is one of the teams of Ooarai Girls High School's Sensha-Dō team, commanded by Ogin, it operates the British Mark IV.

Shark Team consists of delinquent students from the Naval Studies Department of Ooarai Girls Academy. They hang out in Bar Donzoko at the lower lawless parts of the ship after almost being kicked out of the school only to be saved by Momo.

The tank commander of the team.

The primary driver of the team.

The starboard gunner and loader of the team.

The secondary driver and radio operator of the team.

The port gunner and loader of the team.

In the main story

They first appear in the first part of Das Finale. They run their own bar, "Donzoko", in one of the lowest deck of the school ship. One day, Anglerfish Team together with Sodoko visit Bar Donzoko while looking for the tank Momo Kawashima found using the goliath mobile mines with sensors.

Despite their absence in every training, they proved to be able to drive Mark IV remarkably well, having the guts to do what is necessary to save the team, like letting their tank to fall several meters to serve as an emergency ramp during Ooarai Girls Academy vs. BC Freedom High School match. 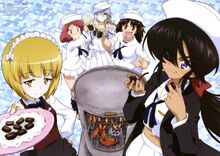 Shark Team on the beach
Add a photo to this gallery
Retrieved from "https://gup.fandom.com/wiki/Shark_Team?oldid=55029"
Community content is available under CC-BY-SA unless otherwise noted.