School Ship, or School Carrier (Gakuenkan) is a gigantic vessel used to host high schools (as well as supporting infrastructures) in the Girls und Panzer universe. These ships are traversing the ocean while maintaining the occupants to live normally just like in the land. Most of school ships are self-sufficient with other needed logistics supplied by mainland on a supply ship or at port of call. Each high school owns their own ship and are responsible for their operation and maintenance. However, the operational of a school ship also requires a lot of resources, and many of the high school operating on a tight budget. The history and reviews about School Ships could be found in OVA 3.

As mentioned in OVA 3, School Ships has been around since the times of Roman Empire. Throughout history, many ships has been modeled for school ships, such as Caligula's Giant Ships, and even British battleship HMS Dreadnought in the age of steam. In fact, it's the British who perfected the concept of school ship system. Nowadays, most of School Ships was modeled from aircraft carriers since carriers has flat top that's very suitable to make a city living environment. Only small amount of them based on other type of ships, such as Jatkosota High School (based on freighter Hakusan Maru) and Maginot Girls College (based and named after French submarines Surcouf).

While dubbed as "school ship", these gigantic vessels are not only hosted a school, but also served as "city on the sea". The surface of the ship is designed to be like a complete city, with all its infrastructures, commercial buildings, and housing facilities resembles any normal city on land. Some specific ships, like the one in Kuromorimine and Bellwal also have their own industrial area. In addition of urban area, the ships also has natural landscape such as hills, rivers, plains, and forest. Certain ships also has field, farms, even fisheries.

Ooarai High School ships, Zuikaku, as mentioned by Yukari Akiyama, host about 30,000 people inside. They're not only students, but also staffs, convenience store clerks, and other people who worked as support system of Ooarai's floating city along with their families. Some student like Yukari Akiyama also have their families live in the ship (usually the ones who also worked there), while other students live in boarding and apartments facilities. Other school ships has number of occupants according to their size. Graf Zeppelin, Kuromorimine's school ships, as one of the largest school ships could host about 100,000 people inside.

While most of the occupants live on the surface, Naval Studies students live below decks in "normal" ship accommodations. Naval Studies student controlled, maintained, and crewed the ship in shifts. Aside from navigation, with students from other departments, they also responsible on every aspects of maintenance and support such as electricity to power the entire ships along with city on top of it. It is said that school ships use combinations of many clean power generators, such as water current, solar cell, wind from ventilation, hydro-thermal, waste combustion generator, also seismic generation beneath the roads.

To provide the needs of carrier-wide people, school ships also had agricultural fields and fisheries below the decks, all maintained by the respective departments. This kind of provisions leads a school ships to operate almost autonomous and self-sufficient. Other needs that was not provided internally was supplied by mainland through supply ship or at port of call. The groceries supplier for most of the school ships is Sunkus, which has massive network of ships to regularly supply multiple school ships.

Like any other ships, school ships are regularly making port of call (perhaps in the end of each week) beside event-related port of call (such as when Sensha-do battle took place). This port of call happens not only at their hometown port, since the carriers are circumnavigating the ocean. However, due to immense size of the ships, not many port able to hold them. This resulting a usual case of two or more school ships making port of call together in the same port, as in the case where Graf Zeppelin and Zuikaku harbor together in the spin off manga Motto Love Love Sakusen Desu. It is believed that the homeport of each school ships, able to hold more than one school ships at once, as in the case where St. Gloriana have friendly battle with Ooarai in Episode 4.

As seen later in Girls und Panzer das Finale: Part 1, Ooarai Girls Academy's Zuikaku has "underworld" located in the lower-half decks of the ship. It is a slump and shady place where delinquents from the school (mainly Naval Studies students) lingers and lazing around. Ooarai called their "underworld" as "The Johannesburg", a place where even Student Council or Moral Committee have no power at all. It is still unclear whether this is specific for Ooarai only or if other school ships has similar kind of underworld as well.

Is the school ship for Chi-Ha-Tan Academy. The name was based on Imperial Japanese Navy's carrier "Akagi" of World War II.

Is the school ship for Anzio Girls High School. The name was based on Italian aircraft carrier "Aquila" of World War II.

Is the school ship for St. Gloriana Girls College. The name based on British aircraft carrier "HMS Ark Royal" of World War II.

Bearn Is the school ship for BC Freedom High School. The name based on French first aircraft carrier "Bearn".

Graf Zeppelin Is the school ship for Kuromorimine Girls Academy. The name based on German aircraft carrier "Graf Zeppelin" of World War II.

Is the school ship for Koala Forest High School. The name based on British light aircraft carrier "HMS Invincible".

Is the school ship for Pravda Girls High School. The name based on Soviet aircraft carrier "Kiev".

Is the school ship for Maginot Girls' College. The name based on French submarine/aircraft carrier "Surcouf" of World War II.

Is the school ship for Ooarai Girls Academy. The name based on Imperial Japanese Navy's aircraft carrier "Zuikaku" of World War II. 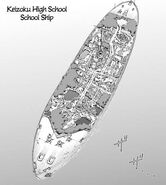 Surcouf, Maginot school ship
Add a photo to this gallery

Retrieved from "https://gup.fandom.com/wiki/School_Ship?oldid=76281"
Community content is available under CC-BY-SA unless otherwise noted.