Renta Tsuji is a MEXT official whose job is the administration of Japan's fleet of high school carrier ships. He has considerable influence in his field, in addition to having a hand in the legal branch of the Sensha-dō Federation.

Renta Tsuji first appears during Episode 9, during a flashback to a time shortly before Miho Nishizumi transferred into Ooarai Girls Academy. He holds conference with the members of Ooarai's student council to unilaterally announce to them that their school carrier will be decommissioned at the end of the following year. The school and town are to be closed down as a consequence.

The premise for this decision was that it was part of a 'review' of underperforming schools that found Ooarai Girls Academy to be over budgeting, and undistinguished in any given area. During the proceedings, he mentions that in the past, there was a flourishing Sensha-dō club at Ooarai. This leads Anzu Kadotani to abruptly revive the Sensha-dō club in Episode 1, after receiving a verbal agreement from Tsuji indicating that Ooarai will not be closed down if they are crowned champions of the 63rd National High School Sensha-dō Tournament.

Renta Tsuji appears once again in Girls und Panzer der Film, whereupon it is revealed that he has reneged on his end of the deal and pushed forwards the decommissioning process irrelevant of Ooarai's tournament win. He claims that the agreement made previously was purely verbal, and hence not legally binding. In response, Anzu Kadotani protracts negotiations, using the backlash caused by the closure of the Sensha-dō champions to gather political allies amongst MEXT and the Sensha-dō Federation. Renta Tsuji is subsequently pressured into a compromise, this time supplemented by a written, signed agreement, that sets up a high-stakes annihilation match between Ooarai Girls Academy and the All-Stars University Team, a dedicated Sensha-dō centre for higher education.

Directly prior to the match, Renta Tsuji used his influence within the Sensha-dō Federation to stack the odds heavily against Ooarai. In addition to being a match fought under annihilation rules, the match allowed teams of up to thirty tanks per side. Tsuji also arranged for a controversial artillery piece, the Karl-Gerät 040, to be approved for Sensha-dō use at the last minute, allowing the All-Stars University Team to deploy one against Ooarai.

Renta Tsuji is a tall, thin man with dark hair and large, rectangular spectacles. He wears a formal business suit and tie.

Renta Tsuji is depicted as being cold and manipulative, not above abusing his position and power to leverage the course of events in his favour. He acts aloof towards the high school students, and is openly contemptuous towards the Ooarai students, belittling their tournament victory by attributing to "luck". Outside of the office, however, he is shown to be openly furious at each of his setbacks, and is constantly scheming to get his own way. 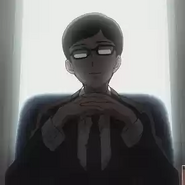 Forced into a contract

Voicing his objections to Ooarai's aid

Ooarai's victory sinks in with him
Community content is available under CC-BY-SA unless otherwise noted.