Before she was named, she was referred to as B-ko (B-子) based on the information on her character sheet.

Remi Takashima is one of the three named judges sent by the Japanese Sensha-dō Federation in order to oversee matches on a high-school level. They are affiliated with the , as well as regional practice matches. As Tankathlon is not recognized by the Federation and doesn't have any specific set of rules, she is obviously not present for any of their matches.

Remi Takashima has long light brown hair with dark brown eyes. She wears her hair in a ponytail, tied by a black ribbon. During sensha-dō matches, she wears the standard judges uniform with the accompanying gorget. When off duty with her co-workers, she has been seen wearing the Japanese Sensha-dō Federation jacket.

Like her two counterparts, Remi is serious to the point of comicality during matches, showing very little emotion (asides from the occasional look of shock) and barely speaking (visibly) at all. This is most likely to maintain an appearance of unbiasedness, in order to keep the judging professional, just, and accurate. As with all of the judges, she possesses keen senses and a rigid moral compass.

Off duty and with her peers, she is notably much more whimsical and light hearted. She expresses a desire to tease the girls from Pravda, by referring to Nonna as a parent in front of Katyusha and Nina. She does not appear to hold much respect for their superior Ami Chono, laughing to the point of tears during Kanon's impersonation of her.

In the web comic, it is shown that she uses the signal flags in order to converse with her judges about non-sensha-dō related topics during matches. This is especially the case with Hibiki: figuring out where to go eat after the match.

Remi dreaming about playing a prank on Katyusha and Nina. 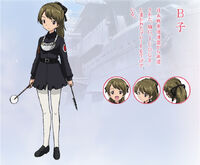 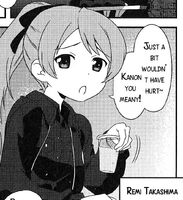 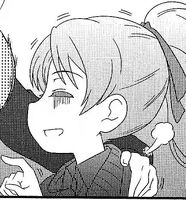 Remi Takashima took off her gorget to speak freely

Add a photo to this gallery
Retrieved from "https://gup.fandom.com/wiki/Remi_Takashima?oldid=67885"
Community content is available under CC-BY-SA unless otherwise noted.