""We took a hit and we're down!""
―Nilgiri, after her tank was taken out in the training match with Ooarai

Nilgiri is an secondary character in the Girls und Panzer.

Nilgiri is a student at St. Gloriana Girls College , as well as the tank commander for one of St. Gloriana's Matilda IIs. She has been served in the St. Gloriana training match against Ooarai in the anime. It is unknown if she commands one of the Matildas in the first compound match.

Nilgiri is a girl of medium height, with brown eyes and brown hair tied in a crown braid. She has been seen wearing the St. Gloriana Sensha-dō uniform, and wears the school uniform outside of battle.

As she has nearly no screen time her personality is relatively unknown. In a MLLSD it is nod that she seems to admire Assam.

Nilgiri was first seen during the practice match against Ooarai, bowing to her opponents at the beginning of the match. She took part in the initial encirclement of the Ooarai tanks, and chased them into the city. Unfortunenately for her her tank is ambushed by the StuG III.

In the match against BC Freedom, she accompanied Darjeeling's tank to BC Freedom's flag tank but she is shot down by the ambushed M4A1 (in a similar manner as in the training match against Ooarai). She is the only St. Gloriana casualties of the match.

In the match against Yogurt her tank is immobilized by an unknown tank or SPG.

In the match against Kuromorimine, she is assigned to the Cromwell tank. Later in the match Darjeeling sent her to divert enemy's attention to permit the Crusaders to perform a reconnaissance to locate Kuromorimine's flag tank.

She was later seen in a MLLSD with Rukuriri observing Assam, believing she thinking about tactics, unaware that Assam instead elaborates lame jokes. 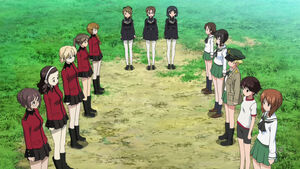 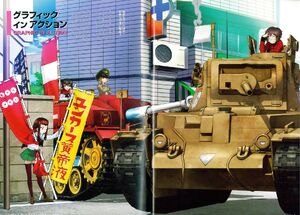 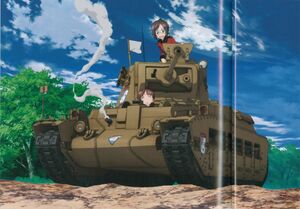 Nilgiri's tank immobilized during the match against Yogurt. 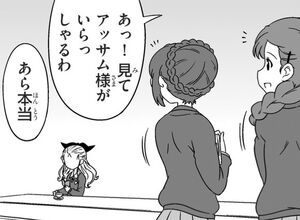 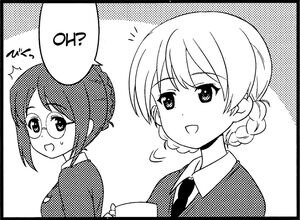 Add a photo to this gallery
Retrieved from "https://gup.fandom.com/wiki/Nilgiri?oldid=73083"
Community content is available under CC-BY-SA unless otherwise noted.