Neko Yamamori is a leading secondary character that appears in the Little Army 2 manga.

Neko Yamamori is a student at Bellwall Academy. She is the leader of a group of delinquent students, and is a member of the Sensha-do team. Together with Doi Chifuyu, they act as advisers and team-leaders to Emi Nakasuga and Hitomi Yuzumoto.

Based on dialogue, it appears that she is a second year student. As a result, a majority of her gang are first year students.

Neko Yamamori made her first appearance in the first chapter of Little Army 2, alongside the other delinquents of the Sensha-do team. During Emi Nakasuga's first day at Bellwall, Neko and her crew of delinquents were having a standoff with her rival: Doi Chifuyu as well as Doi's band of delinquents. When the situation became violent, she fought Doi directly. After the fight was broken up by Emi Nakasuga and Hitomi Yuzumoto, the two delinquent leaders can be seen staring at each other over a game of Go.

Neko made her next appearance when she was questioning a member of the maintenance club about the details of a bet that Emi had made against their leaders, Kanako and Tsurugiko Kashiwaba. She then had Emi Nakasuga, Hitomi Yuzumoto, Kita and Takami dragged into her garage in order to punish them for betting the Sensha-do team without her permission.

Neko Yamamori is a tall girl with messy short purple-brown hair and light brown eyes. She has a noticeable ahoge. She wears a black fur coat over a white v-neck, along with the skirt from the school uniform.

During matches, she wears the Bellwall Senshado uniform and school skirt.

On the surface, Neko appears to be a fierce and ruthless girl: the type of delinquent leader to rule through aggression and brutality to force others into submission. Unlike her counterpart Doi, she strikes hard and fast, never content to rest on her laurels. As such, she tends to have a highly intimidating demeanor, scaring others into silence and inaction.

Despite this external delinquent personality, Neko is actually a caring and thoughtful person on the inside, to her friends and even Doi during moments of truce. (TBC-TTG)

Neko Yamamori's Jagdpanther crew consists of her most trusted subordinates in her delinquent gang. They are as follows.

Kiri angering all of the leaders at Bellwall.

Color picture of the leaders.

The Shark and the Bear. 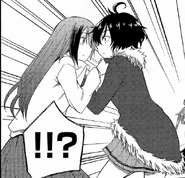 Neko and Doi's confrontation is broken up by Emi.
Add a photo to this gallery
Retrieved from "https://gup.fandom.com/wiki/Neko_Yamamori?oldid=40123"
Community content is available under CC-BY-SA unless otherwise noted.