No mentions of their school policy or students behavior are made.

Their main force consists of Ram Cruiser Tanks and Grizzly Cruiser Tanks. They also possess the Valentine Tank and other Infantry Tanks along with various light tanks, such as the Light Tank Mk.VIB, however they are rarely used.

They have a healthy Sensha-dō program, which focuses on maneuver tactics rather than heavy firepower or armor.

The schoolship's name appearance is unknown, however it was purchased as an incomplete vessel from the United Kingdom. One point of note about the schoolship is that has the most natural, green environment aboard compared to other schoolships, with Viking Fisheries High School following closely behind.

Only their sensha-dō uniform is seen. It consists of black beret with a maple leaf, a white shirt with the school symbol of the sleeve and a dark undershirt underneath, a black tight skirt, full length black tights and black short boots.

Based in the city of Tomakomai in the Hokkaidō Prefecture, the story of Maple High School begins in 1877, when Manzo Nagano, the first Japanese immigrant to Canada, arrived in British Colombia.

Between 1877 and 1914 over 10.000 Japanese had immigrated to Canada. In 1889 Japan ease its ban on emigration & opened a consulate in Vancouver and a few cities were forced to enact a bread ration due to the significant number of Japanese immigrants. In an effort to ease tensions, the Canadian and Japanese governments began talks to establish a new international relationship. The Canadian ambassadors on a diplomatic mission soon arrived in Japan, and various schools started an international program to teach western culture and values.

In 1929, the Canadian embassy in Tokyo opened and began cooperation with various economic and industrial districts. It was noted that the general climate of Hokkaido was very similar to Canada.

There was great cooperation and many advancements in the fields of Art and music, culture, and forestry, and through Canadian assistance Hokkaido’s fishing industry flourished and their mutual relationship eventually culminated in a joint Canadian-Japanese school. Hokkaido is split horizontally into two areas with different regional governments, and after an unfinished school ship was purchased from the United Kingdom, the school on the southern half was named Maple High School.

For the first round of the Tankathlon Tournament, Maple fought Chi-Ha-Tan Academy and lost the match. Their moves that were possible thank to their Yojimbo (a big boat lent by local fishermen) were anticipated by Fukuda who stopped the advance of Maple tanks to Chi-Ha-Tan's rear and all the Maple tanks were then crushed by their opponents thank to their Yojimbo, Jatkosota which provided them with additional necessery intel.

She is Maple's overall commander as she is referred as Captain (隊長). She commands a Light Tank Mk VIB

She is one Maple's students. She commands a Light Tank Mk VIB.

She is one Maple's students. She commands a Light Tank Mk VIB.

Maple participating Tankathlon (the tank has a fake gun that will be corrected in later chapters). 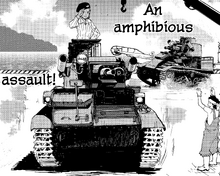 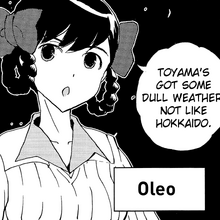 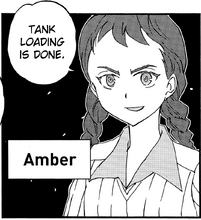 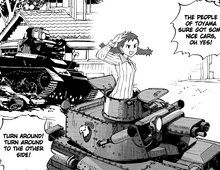 Amber in her tank crushing cars. 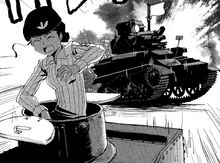 Mark VI destroyed by Fukuda.
Add a photo to this gallery
Retrieved from "https://gup.fandom.com/wiki/Maple_High_School?oldid=69141"
Community content is available under CC-BY-SA unless otherwise noted.