Maginot students are expected to be extremely well-behaved, polite, and respectful. They are usually very eager to learn, but their individual creativity is somewhat lacking, and this deficiency translates over to senshado, where individual initiative and flexible tactics are seen as less important than demonstrating traditional French tactics. Though group discipline is very good, individual discipline can vary wildly. This makes cooperation rather difficult, especially with the school's maneuver-focused doctrine.

As a school-wide policy, creativity is not promoted, with the exception of art, film, and theater classes. As a result, while the students are not especially original or innovative, they can focus heavily on certain skills, honing their talents to the point of mastery. The most notable example of this is Maginot’s famous culinary classes. Such is their reputation that some students enroll specifically for that class. Their cuisine highlights the simplicity of flour and buckwheat and the richness of wild vegetables, game fowl, and mushrooms.

Maginot exclusively fields vehicles developed in and used by France. The Renault FT (better known as the FT-17) and the R35 fill the light tank role. Maginot uses the SOMUA S35 Cavalry Tank as its medium tank, and the Renault B1 Bis as its heavy tank. While Maginot's lineup may seem respectable on paper, technical issues and outdated engineering cripple the team in matches. One major drawback of their tanks is that they were not designed to carry radios, a feature required by the Senshado Federation. But even with emergency radios on board, communication seems to be a weak link in Maginot’s team. There have been discussions about fielding the ARL-44 as Maginot’s wonder weapon, but due to a lack of funds, crews, and confidence in the tank's capabilities, it seems Maginot will not be using the ARL-44 in the near future.

Maginot's standard tactics revolve around a defensive battle group. The SOMUA S35 sits at the center, surrounded by light tanks, while the B1 heavy tank is kept in reserve for use against heavier targets. This formation requires crew members to be disciplined enough not to panic when a potential break occurs.

The other schools have said that even though Maginot's tanks and tactics may be old and useless, its crews are accustomed to brute force, since their defensive formation subjects them to a great deal of fire.

One thing that sets Maginot Girls' College apart from the other schools is its school ship, the Surcouf. Instead of being a giant aircraft carrier, it is a giant submarine, modeled after the World War II French submarine Surcouf. The decision to use a submarine instead of the more ubiquitous surface ship was to aid the wine-making process, as the storage and fermentation time are evidently better underwater.

Many, if not all, of the ship's buildings seem to have a Haussmannian architectural style.

Maginot's school uniform consists of a white, high-necked, Victorian-style ruffle blouse with a pink ribbon tied around the neck, a navy blue pleated skirt, and black socks and shoes.

Maginot's senshado uniform consists of a blue jacket with two rows of gold buttons, gold stripes on the sleeves, gold and blue epaulettes and collar badges, a white blouse with a red tie underneath the jacket, a white short tight skirt, and a pair of boots. Their collar badges are composed of one of the four card suits and a color in French (Heart Blanc, Clubs Rouge, Diamond Vert, Spade Bleu, etc.). The highest-ranking badge seems to be Spade Bleu.

Maginot is a private girls' school, based in Yamanashi Prefecture. Due to its landlocked nature, the school's submarine port is actually located in Shizuoka Prefecture. It was created to preserve the knowledge of winemaking after its founder returned to France. The ability to make wine with the traditional foot-crushing method is the only reason Maginot is a girls-only institution.

Maginot has a long history of losing senshado matches, but the punishments for defeats are still very harsh.

A sudden change in management

Four months before the start of the 63rd National High School Sensha-dō Tournament, a second-year student named Éclair challenged Madeleine, the commander, to a duel for command of the senshado team, calling Madeleine's tactics archaic and blaming them for Maginot's repeated losses. Despite Éclair's victory, she was never as respected as Madeleine, and due to the former commander's departure, Maginot's senshado team lost nearly 51 members out of 80 (all of the third-years, half of the second-years, and some of the first-years).

Éclair tried to get rid of the old defensive tactics by replacing them with a strategy favoring mobility called the "Saint-Cyr style," which was inspired by Napoleon's cavalry tactics. Several matches, the last of which was against Saunders University High School, would prove this style to be incompatible with French tanks due to the tanks' tiny crews (in the R35 and the FT17, the commander is alone in the turret and has to act as the commander, loader, gunner, and radio operator), lack of speed (none of Maginot's tanks have a top speed over 40 km/h), and ever-present tensions among the team.

Just before the tournament, Maginot received a request from Oarai Girls' Academy (recently defeated by St. Gloriana Girls' College) for a training match. Éclair, eager to employ her style and defeat a Nishizumi, jumped at the chance and accepted. Their force was composed of SOMUA S35s, Renault R39s, and a Renault B1 Bis. Maginot's first move was to entrench their tanks, concealing their recent shift in tactics. After the deception was discovered, Maginot suffered some losses, and Éclair fainted on the battlefield. Éclair rallied her team and managed to eliminate some of Oarai's tanks, but in the end, all of their tanks were taken out, and Maginot lost the match.

Maginot participated in the 63rd National High School Sensha-dō Tournament and faced Anzio High School as their first opponent. Their force was composed of SOMUA S35s, Renault R35s, Renault FT-17s, and Renault B1 Bis. Despite having material superiority over Anzio, Maginot fell into Anzio's trap by pursuing Anzio's CV.33s, leaving the flag tank at the mercy of the Semoventes. When Maginot realized their their mistake, they tried to protect their flag tank, but it was too late. They were eliminated in the first round.

For the first round of the Tankathlon tournament, they fought Viggen High School in the first round and won, making this their first successful battle since adopting the Saint-Cyr style.

Maginot participated in the 41st Winter Continuous Track Cup and faced Kuromorimine Girls Academy as their first opponent. Their force was composed of six SOMUA S35, two R35s, one FT-17, and two B1 bis (one of which was the flag tank). At the end of the match, Maginot was entrenched in a bunker reminiscent of the Maginot Line. When Kuromorimine unleashed a fire barrage on Maginot, at least one R35, Éclair's SOMUA, and the B1 bis flag tank were destroyed. They were eliminated on the first round.

The overall commander of the team. New to her role, she has some misgivings about the reforms she is trying to implement, causing her to suffer from chronic stomachaches. Still, she is determined to lead her school to victory. She became the commander of the team after winning a duel against Madeleine. She has expressed admiration for Shiho Nishizumi and the Nishizumi style. In the training match against Oarai, she commands a SOMUA S35.

Éclair's right-hand girl. She usually takes care of the paperwork for her team, amassing information on Ooarai prior to their practice match with them and so on. She is fiercely loyal to Éclair, but her directness, especially in pointing out the team's faults, tends to irritate her commander. In the training match against Oarai, she commands another SOMUA S35.

The commander of a Renault Char B1 bis. Having been close to the previous commander, she is skeptical of Éclair's reforms, and hostile towards Éclair personally. Nevertheless, she obeys Éclair's orders faithfully. Her greatest wish is to restore Maginot's lost honor.

The previous overall commander. Éclair questioned her methods and challenged her to a duel, winning the position from Madeleine. Upon losing the match, Madeleine left the senshado team. She appears in flashbacks and as a spectator at the training match against Oarai.

A third-year student who never accepted Éclair as her commander. She may have quit senshado after Madeleine's departure from the team. She only appears in the second flashback of the Maginot manga. 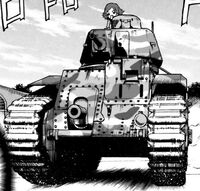 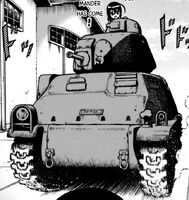 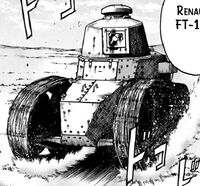 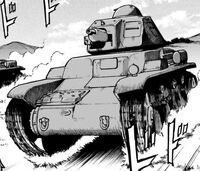 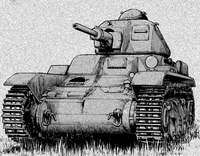 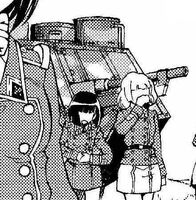 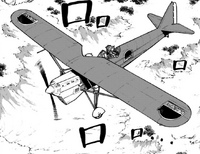 ANF-Les Mureaux 117.R2 recon plane
Add a photo to this gallery
Retrieved from "https://gup.fandom.com/wiki/Maginot_Girls%27_College?oldid=75984"
Community content is available under CC-BY-SA unless otherwise noted.