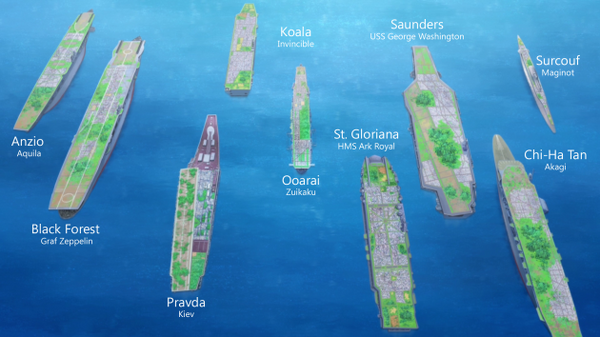 The following is a complete list of all educational institutions in the Girls und Panzer Projekt including those details in official spin-offs and supplementary material. All schools appearing in the anime are Japanese schools, but many have a motif from another foreign WW2 nation. All secondary school institutions are built upon school carriers, huge aircraft carrier hulls operated entirely by students, with towns built on the main decks. School ships each have a coastal home town where they can put in for servicing. Most school ships are also based off of a real life military vessel.

The protagonist school in Girls und Panzer. Nominally a minor school in the high school senshado league, Ooarai has the smallest senshado team and operates the smallest number of tanks. The school's tanks come from a variety of different nations, and the school has no specific theme.

A large school with a strong senshado team. It's members value elegance and composure. They are also known to make excellent tea. The school operates many early-war British designs, and is themed after the United Kingdom.

A very large school that operates a huge armada of tanks. Their students are open, friendly and enthusiastic. They like to eat a lot and party often. Most of their tanks are variants of the M4 Sherman. They represent the United States of America.

A large but poor school. Their students are high spirited and impulsive. They love food and cooking, and are also famous for throwing lavish parties. They mainly operate tankettes, and are usually the underdogs against the other major schools. They are inspired after Italy.

A school that often sails far to the north, resulting in cold, snowy winters. At the time of the anime series, they are the senshado tournament's defending champions. The school and its tank forces resemble the Soviet Union.

A very prestigious school with a very large and powerful senshado team. They have won the senshado tournament the most times out of any school. The school is the home of the Nishizumi Style. Their tank arsenal and tactics emulate the Wehrmacht.

A school that operates many light tanks and small medium tanks. The students have a poor grasp of strategy and a fascination with frontal charges. They represent Imperial Japan.

A minor, reclusive school that frequently makes major modifications to its vehicles. It's students are excellent tank drivers and very accurate gunners. They are known to enjoy camping and solitude. The school is based on Finland.

A school known for its very good cooking and fine wines. It's senshado team is traditionally defensively-oriented. The school ship is uniquely based upon a submarine instead of a surface vessel. The school represents pre-war France.

BC Freedom is best known for an intense political and social division between its two factions. Infighting and internal conflict is very common, preventing the school from functioning effectively. The school resembles Free and Vichy France with Pre-Revolutionary Elements

A school with a fractured senshado team and high delinquent activity. It has a large industrial sector separate from the school, which has gone defunct due to poor law and order. The school's tanks originate from Nazi Germany or the Soviet Union. The school represents the post-WWII state of occupied Germany.

A school of high-achieving academic students. It has well-respected courses in cuisine and music, and also runs an elite horse riding team. The school is inspired by Poland.

A school which loves food and fashion. The school runs a senshado team on a voluntary basis, but views it as a secondary priority. Its theme is Spain.

A small school with an active agricultural program. The students are prominent practitioners of witchcraft and superstitious arts, and will use divination to determine their senshado tactics. The school is based off of Romania.

A small school known to be suffering from tight finances. Its students export manufactured goods to Europe and have a thriving foreign exchange program. The school is inspired by Czechoslovakia.

A school with a capable but poorly led senshado team.

A school with close ties to many other major schools. Its students are laid-back and love barbecues. There is no social hierarchy in the school. The school often makes use of reckless tactics. It represents Australia.

A school with a lot of greenery on its school ship's main deck. The students love fishing and forestry. The school resembles Canada.

A school that specialises in making cosmetics. Their senshado team is enthusiastic but inexperienced and poorly trained. The school represents occupied Burma.

A school with no existing senshado club. Many of its students practise Yabusame. The school has no specific theme.

A minor school that specialises in home economics and interior design. The have a small senshado team but do not participate in the National Tournament. The school is resemblant of Sweden.

A school known for its love of nature and exquisite seafood. Their students are punctual and organised to a fault. The school represents Norway.

A school that imports large quantities of food, and deals in foreign cuisine. They have recently begun using income profits to build up a small senshado team. The school is themed after Belgium.

A minor school with a large force of senshado tanks. The school strives to emulate St. Gloriana Girls' College, but is generally viewed as a more arrogant, less refined impostor.

A school filled with very patient students, who spend their time waiting for their school to become great. The school has converted many agricultural vehicles to tanks, but lacks the funds to maintain a strong senshado team. The school represents Bulgaria.

A minor school with a minimal senshado team. Its students are known for luxurious clothing and fine coffee. The school's theme is Turkey.

Not a school per se, but a team that trains university grade students for entry into the professional theatre. The team has a vast armada of heavy equipment and is a focal point for highly skilled tankers. It is the home of the Shimada Style. The elite senshado team, the All-Stars University Team, is resemblant of the United Nations.