During a calm period before the first round of the Commemorative Cup, Jinko ends up finding her former teammates, Chifuyu Doi and Neko Yamamori, with arms full of food from Anzio. After a bit of backstory, she mentions her switch over to Gilbert, revealing herself to be the Overall Commander of Gilbert's Sensha-do team and Bellwall's first opponent. She then attempts to insult Bellwall's team, calling their new commander, the "German foreign student" Emi Nakasuga, "lame". While she does this in an attempt to destabilize the chain of command, she underestimates their unity under Emi, causing Gilbert's poorly led but well-armed team to lose the match.

She is characterized by short, blonde hair, square glasses, and a mole a little to the left of her bottom lip. In the scenes she's in in Little Army Two, we can see her wearing her school uniform over her panzer jacket.

Jinko is clearly upset with Bellwall's poor condition and delinquent Sensha-Do team, which is the reason she left for Gilbert High School, and becomes very rude towards her past students, surprising her current friends from Gilbert. She is seen as a bit of a manipulator, using her harsh words in an attempt to disrupt Bellwall's chain of command (despite failing). She also appears to be full of herself as she didn't even bother changing the tactics she used in Bellwall when opposing her former team, which ultimately led to her new team's defeat. 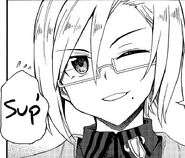 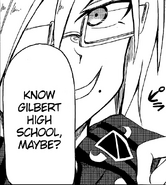 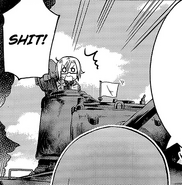 Jinko's friends from Gilbert.
Add a photo to this gallery
Retrieved from "https://gup.fandom.com/wiki/Jinko_Yoshinaga?oldid=45360"
Community content is available under CC-BY-SA unless otherwise noted.