"Look closely and suck on your thumb while I slaughter these sacrificial lambs of yours... Chibi."
―Jajka taunting Katyusha before the Tankathlon match

"Bonple's Jajka... Hm. Nonna wasn't that the chick you've beaten up so violently ?"
―Katyusha about the fate that Nonna reserved to Bonple

"Come at us whenever you want! We'll take you on! No matter when, no matter where, and no matter who!"
―Jajka during her villainous breakdown after beating Pravda

Jajka is the overall commander from Bonple High School. She operates a Polish 7TPjw. She is also known by the title of Grandmaster or the Queen of Tankathlon.

Jajka is a medium-sized girl with long blonde hair and a pair of green eyes. She wears her blond hair in a long braid originating as a swirled bun. Jajka is often seen wearing the Bonple High School Sensha-do uniform (with ornaments due to her rank) and sometimes she's seen with the school uniform. She's also seen (only in mental representation of herself) dressed as a Winged Hussar.

She is first seen as a calm and charming lady although being a little arrogant. She later reveals to be condescending, sour, eager of revenge (especially since their humiliating defeat while facing Pravda) and extremely ruthless. She is then driven mad by her victory against Pravda challenging everyone to beat her. But she also appears to be highly skilled as she manages to defeat a team that fielded more than thirty tanks (not without suffuring losses) with eight tanks and two tankettes. She also, according to Uzska, wears a lot of make-up due to a complex she has with her face. Jajka however has a kind side to her shown during a training match with tategoto ( a match yukari was watching during her one of her infiltrations ) where she is being supportive of aung by telling her that she is improving and that her first victory is close.

Little is known about Jajka before Ribbon Warrior except that she commands everything that touch more or less to tanks in Bonple, that she suffered an humiliating defeat facing Pradva during the first round of the 63rd National High School Sensha-dō Tournament (she will retain a great bitterness from this defeat and an immeasurable hatred toward Pravda) and that she managed to build a name for herself in Tankathlon by winning the Tankatlon last season tournament and earning the nickname "Queen of Tankathlon" so far that she has better consideration toward Tankathlon that Sensha-do.

She joins Tankathlon actual season after learning that Anzio will be part of it. She later assists a match, that opposed Anzio to Tatenashi High School's Centipede, due to Anchovy bringing more and more tankettes in the fight she feels obliged to interrupt the match that she considers "weak" by shooting at Anchovy's CV.33. After a failure of Pepperoni to attack Jajka's tank she taunts everyone about the true valors of Tankathlon.

The beginneer school of Tategoto allied with Anzio will be annihilated by Bonple due to Tategoto's inexperience and Anzio's lack of firepower and awareness. And then she's seen on Bonple's carrier preparing żur to celebrate their next match against Pravda (under the name of Katyusha's Volunteer's Army). Finally her revenge is within range.

She's seen violently taunting Katyusha before the beginning of the match. She fielded eight 7TPjw and two TKS 20mm tankettes during against sixteen T-70. Against KVA she used mostly ambush tactics and traps, however this is not enough and her team suffer some loss. This getting hard for Bonple when Katyusha called a second echelon of sixteen tanks to perform a double envelopment. Jajka and three other tank camouflage in the snow letting Uzska as a bait to lure the main force away from the flag tank. Once the tanks passed she and her remaining tanks charged Nina's tank and shot her down winning the match. After the match Jajka burst out laughing and challenged anyone to defeat her in Tankathlon.

Jajka in her schoolgirl attire.

Jajka in her military attire.

Jajka & Uszka before interrupting the match between Anzio and Centipede team. 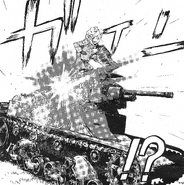 Jajka's tank shot by Shizuka Tsuruki, after she destroy Anchovy's tankette, accusing her to steal her kill.

Jajka & Uszka before celebrating their upcoming revenge against Pravda.

Jajka posing with her forces.

Jajka's thirst for revenge against Pravda is fulfilled.

Jajka as a Winged Hussar after taking down Nina's tank.

Jajka can be kind too 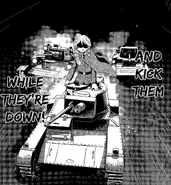 Kick them when they're down.
Add a photo to this gallery
Retrieved from "https://gup.fandom.com/wiki/Jajka?oldid=77053"
Community content is available under CC-BY-SA unless otherwise noted.