The story follows Miho Nishizumi, Emi Nakasuga, Hitomi Yuzumoto andChihiro Yusa during their last year of elementary school. They already knew each other as classmates, but Hitomi's interest in sensha-dō made her and Chihiro approach Miho, as she was the sister of a former student of that school, Maho Nishizumi, who was already achieving victories in sensha-dō during her first year of junior high school, possibly at Kuromorimine Girls High School; while the trio approached Emi due to her historical acknowledgement on sensha-dōck in Germany, becoming close friends.

The four of them tried to make up a tank crew while passing through some ups and downs, with Miho considering quit sensha-dō because of the Nishizumi Style, Emi's selfishness, arrogance and lack of reciprocal interest to the group, and Hitomi's inability with sticking to things. Chihiro was the only one to not show any divergences, however she didn't show interest on sensha-dō as she only followed Hitomi, but she was a great support in ensuring that Hitomi wouldn't quit.

They managed to make up a one-tank team with a Panzer IV Ausf D with Miho as the commander, Emi as the driver, Hitomi as the gunner and Chihiro as the loader. They only had one mock battle against Maho's junior high school crew tank. This sensha-dō experience was short lived as elementary school was about to end and they needed to start making decisions regarding their future, Miho decides to continue practicing sensha-dō to find her true way of fighting, Emi decides to go back to Germany to do the same, Hitomi's fate isn't clear, but Little Army Two shows she stuck with sensha-dō and Chihiro takes on a non-sensha-dō path as seen in LA Two.

The manga is settled on Kumamoto City, the home town of the elementary institution the main characters study at, Kuromorimine Girls High School and the Nishizumi Style House.

A shy and lonely girl: Due to her family traditions, strict rules and atypical love of tanks Miho doesn't have many friends. Hence she becoming extremely happy and excited when she meets girls of her age with whom she could be friends and share her sensha-dō.

Emi is half-German and half-Japanese, she moved to Japan with her mother and older sister in order to accompany her sister on a sensha-dō competition, staying at her grandmother's house. She initially planned on staying for one year, but as her sister was defeated by Maho Nishizumi and plans with her elementary classmates diverged she decided to cut short the trip and return to Germany.

Hitomi is best friends Chihiro since childhood, she has some interest in sensha-dō and is a fan of Maho due to her recent achievements. She has difficulty with sticking to activities and hobbies on a long term basis.

Not much is known about Chihiro, except that she is the childhood companion of, and best friends with, Hitomi, knowing her like no one else. She is the only main character to be shown as interested in activities other than sensha-dō, being more into athletic sports.

Miho's older sister, Maho is in the first year of junior high school; she already possesses some of the abilities and skills of a good sensha-dō practitioner and follows the Nishizumi Style almost blindly to please her mother. Like in the other spin-off manga Motto Love Love Sakusen Desu!, she is shown to already be popular due to her achievements.

The head of the Nishizumi Style. She is the mother of Miho and Maho.

The caretaker of the Nishizumi family house, she has a responsibility to take care of the house and the girls, Miho and Maho, as Shiho is seldom home. She also provides tips and life advice for them, mostly for Miho. 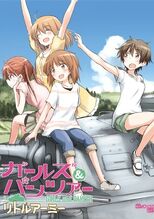 Panzer IV childhood crew
Add a photo to this gallery

Retrieved from "https://gup.fandom.com/wiki/Girls_und_Panzer:_Little_Army?oldid=54462"
Community content is available under CC-BY-SA unless otherwise noted.