"My family has practised Sensha-dō for generations, but I have only bad memories of tanks."
―Miho Nishizumi

Episode 1 "I'll Take Up Panzer Warfare!" "Sensha-Dõ, Hajimemasu!" (戦車道、始めます ! ) is the first episode of Girls und Panzer. It was originally aired on October 8th, 2012 in Japan.

The episode begins with a flash-forward to the events of Episode 4 (i.e. the training match against St. Gloriana Girls College). From a tank's point-of-view (POV), a valley can be seen, with five tanks advancing in the distance. Two girls are heard discussing about them, then they are seen returning to the tank; keeping the same POV, the tank gets on the move and as it climbs up a gorge, four more tanks of various kinds and nationalities (all strangely painted) can be seen, all apparently crewed by girls. Following a plan, the other tanks steer away to prepare an ambush, while the first tank keeps on going to be the bait; its crew exchanges some words of encouragement about this being their first battle. The tank fires on the opponent to get their attention and the enemy tanks start following it; the commander warns the crew that they can't afford to get hit. One of the enemy's gunners take a shot and the camera closes in towards the tank commander's face as if it were from the shot's POV. Then the scene fades to white.

The scene then changes to a girl's bedroom, where a girl is sleeping. When the alarm goes off, she hurriedly and worriedly deactivates it, then she makes her bed and starts to change; suddenly she stops and happily reminds herself that she is not at home anymore. She then is seen happily walking to school, the only strange note being that she is all alone, although other girls are seen walking in the same direction. During the lunch break, she stays behind to pick up a few things that fell and is then approached by two girls (Saori and Hana), who ask her if she wants to eat lunch together with them, which she nervously and shyly accepts; as they're getting their food, their names are revealed (respectively, Miho Nishizumi, Hana Isuzu and Saori Takebe). While they're eating, Miho declares that she's happy that she made some friends, but when asked by the others about why she transferred to Ooarai Girls Academy alone, she appears uncomfortable and they drop the issue.

In a dimly-lit room, three girls are seen discussing something and they agree that they will start with it right away. In class, the three newfound friends deepen their friendship, with Saori revealing her fixation with boys (to the point of thinking of normal greetings as signs of interest), and Miho saying that she envies Hana's calm and mature behavior (to which she gives the reason that she has been doing flower arrangement all her life, although she worries she might be too stiff). Just as Miho thanks them for being friends with her, the three girls from before (revealed to be the Student Council's members) enter the classroom and approach her; they tell her in a quite assertive way that, having to pick her elective activity, she should pick Sensha-dō; to Miho's protests that she believed that the school didn't have Sensha-dō on their curriculum, they nonchalantly tell her that it has been reactivated and leave. Miho appears completely shocked, so much that she is sent to the infirmary by the teacher; Hana and Saori, worried, feign being sick as well to reach her.

As soon as they're left alone, Hana and Saori ask Miho about what transpired; Miho eventually admits that she comes from a family with a long tradition of Sensha-dō (a traditional martial art reserved to girls), but she hasn't got nice memories of it, and therefore came to Ooarai precisely to avoid such an activity. Her friends, understanding why she reacted that way, tell her that she doesn't have to do it. Just then, the loudspeakers announce that every student should gather in the gym. There, the Student Council present the electives activities, with a highlight on Sensha-dō, showing an advertisement-like video about it, which emphasizes its feminine qualities and then explains how choosing such as an elective will bring advantages; Hana and Saori begin to look interested, but Miho still shows signs of apprehension. The other members of the initial five teams are also seen with a look of interest. After school, both her friends state they would like to take up Sensha-dō, much to her horror.

After a troublesome night (in which she vividly remembers a tank falling into a river), in the morning Miho asks for their forgiveness as she chooses incense as an elective and doesn't want to take up Sensha-dō again; much to her surprise, both Saori and Hana accept her decision and decide not to join, wishing to remain close to her and not wanting her to suffer. At lunch, as everyone around the school is displaying interest in Sensha-dō, she is called by the Student Council; as she is visibly worried, her friends volunteer to go with her. As the Student Council directly asks her to reconsider her choice, Hana and Saori stand up for her, accusing them of being tyrannical (especially after the President gives a cryptic warning about them "not being there the next year if they keep this up" (Though in Episode 9 it was revealed that they literally meant that, since the school will be closed next year if they don't win the National Sensha-dō Tournament this year and Miho joining Sensha-dō is crucial in accomplishing that, since she's the only student in the school who has proper experiences with Sensha-dō). Realizing that her two friends are putting her well-being above their own inclinations and aspirations, Miho takes a decision and blurts out that she will take up Sensha-dō, much to the Student Council's satisfaction and Miho's friends shock. Later, in an ice cream shop, Hana and Saori ask her if she is alright with it, but she states that she'll be fine, stating how much she appreciated how someone showed concern for what she feels (and saying how her mother and sister expected her to dedicate her life to Sensha-dō); however, she is troubled still, so her friends decide to cheer her up with the help of their ice cream.

The next morning, the girls that chose Sensha-dō gather before a huge warehouse; 21 in total, including the Student Council, as they remark stating that they will have to do. Amidst much excitement, the warehouse doors are opened - only to reveal a single, rusted-up tank (a Panzer IV Ausf. D). While everyone balks at that, Miho walks up and after looking at it, she declares that it's still in good overall condition and they might be able to pull it off. The camera then zooms off, revealing at last that the warehouse, the school and the town are located on a giant ship resembling an aircraft carrier. 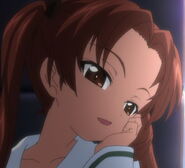 The suspicious and manipulative president.

Miho surprised by another student
Add a photo to this gallery
Retrieved from "https://gup.fandom.com/wiki/Episode_1?oldid=55381"
Community content is available under CC-BY-SA unless otherwise noted.