"Damn you! Our tracks are really heavy!"
―Emi Kojima

Emi Kojima (小島エミ, Kojima Emi) is a background character in the anime, but takes a more prominent role in the manga spinoff Motto Love Love Sakusen Desu! and has a cameo in Girls und Panzer der Film as well.

The Jagdpanther Commander attends Kuromorimine Girls Academy. As her nickname suggests, she commands the school's Jagdpanther.

During the match against Ooarai in the 63ʳᵈ National High School Sensha-dō Tournament, the Jagdpanther Commander was part of Maho Nishizumi's main force. While pursuing Ooarai, she was the first victim of Turtle Team's flank attack. Her tracks were blown apart by the Hetzer's cannon, and the tank was immobilized, but not out of the match. A Panther also had its tracks blown apart as well. After taking counter-fire, Turtle Team retreated, allowing for the Jagdpanther Commander and her crew to safely disembark and begin repairing and replacing the tracks on her tank.

After finishing the repairs in short order, she began moving her tank towards the Kuromorimine assault line against the Ooarai position on the top of the hill. She expressed gratitude that she was able to make it on time, but her relief quickly evaporated when she heard the Hetzer's engine behind her once again. Yelling at her crew to engage the Hetzer at 7'o-clock, they were unable to rotate the tank more than a few degrees before the Hetzer blew off their tracks yet again. She exclaimed in anger and horror that, "We just fixed that!" and swearing at the Hetzer, yelling that the tracks were really heavy. As such, she was unable to join the Panther Commander's defensive line, and many have believed that the Hetzer was able to get that close to the line before being spotted because the tanks of the right flank believed that it was the Jagdpanther rejoining their group, and did not take notice to the model of tank until it was too late.

She later finished fixing her track and rejoined the main force advancing on the city. She is not seen from or heard again in the anime.

The Jagdpanther Commander later attended Maho Nishizumi's Christmas party. She was one of the last ones to arrive, but still made it on time. However, the Maus Commander berated her for not arriving early, with the Panther Commander explaining about how it had to be a strategy meeting they were attending. Upon realizing the situation, she broke down completely and starting crying for her mother. However, her panic immediately evaporated upon realizing that Maho Nishizumi was genuinely hosting a Christmas Party. She happily participated in the events. She received a Hetzer model as a gift, and immediately had flashbacks to the Ooarai vs. Kuromorimine match. However, she accepted the gift, to avoid upsetting Maho.

During Valentine's Day, she was seen exchanging friendship chocolates with the rest of the commanders, in the process of handing one to the Maus Commander when Erika Itsumi passed by. She then presented to her teammates a box that had been addressed to them, and was happy to have received chocolates from what she assumed were her fans. Upon opening her box, she found a chocolate Hetzer, and was immediately enraged by its very presence. She was also the one who identified that the box came from, "Ooarai's masked Hetzer" and was at an odds as to what to do with the chocolate tank. In the end, she ate the tank.

The Jagdpanther Commander attended a port leave with the rest of her teammates. While searching for Erika Itsumi, she encountered the Ooarai Sensha-dō team. Remembering the injustice and indignity the Hetzer had wrought upon her, she and the Panther Commander demanded that the crew come out, intending on taking their revenge on them. However, she failed to notice the Student Council sneaking away from behind their backs. The situation was defused when Erika Itsumi and Miho Nishizumi returned.

In the movie, the Jagdpanther Commander commands a Panther tank that joins the Ooarai Compound Team in the battle against the All-Stars University Team. It joins the Sunflower Team but is taken out by a shell from the Karl-Gerat SPSM, sending her tank flying and landing on its turret.

She later visited Ooarai Girls Academy with several of her team members. She had an ulterior motive of confronting the Hetzer crew members, which she had learned was the Ooarai Student Council. However, when she found the Student Council, they welcomed her and treated her with hospitality, treating her to a lavish meal and giving her a box of sweet potatoes. Her opinion of Ooarai appears to have changed completely after that incident, going so far as to claim, "Ooarai sure is nice!".

The Jagdpanther Commander is a kind and somewhat sensitive girl. However, she can become irritated easily, especially if a negative event (replacing the track) occurs frequently. When angry, she tends to flail a lot with her arms. She blames herself for not arriving to the defensive line on time to prevent the enemy from breaking out of the encirclement. Upon encountering a stressful situation, she has a tendency to cry for her mother.

The Jagdpanther Commander becomes furious whenever she is reminded of a Hetzer, contrary to her normally calm and gentle demeanor. Like several of her counterparts, she has been traumatized by her experience, and seeks revenge on the crew. She changes her mind later, when the Turtle Team treat her with hospitality during her visit to the school.

Seems to be pretty good friends with the Maus Commander, Panther Commander and Panzer III commanders as they can be seen exchanging friendship chocolates, and go looking for Erika together.

Bumped into Duck Team while searching for Erika. 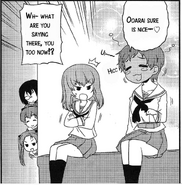 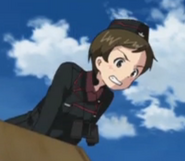 Furious at having her tracks blown off for the second time.

Community content is available under CC-BY-SA unless otherwise noted.