Aung is a student of Tategoto High School. She is the actual overall commander of the school's new Sensha-dō and Tankathlon Team and she operates a Japanese Type 95 Ha-Go.

Aung is seen to be an enjoyable and helpful person, but she is also quite nervous and lack of self-confidence. With Shizuka's help she is proven to be a quite competent commander and even more under with Jajka's inspiration and under the command of Maho Nishizumi, where she is shown to be also quite relentless.

After obtaining her school's independance from St. Gloriana Girls College, she realizes that tried to raise funds to resurrect her school's Sensha-Dō Team by selling thanaka. But as it was not enough she decided to participate to Tankathlon matchs.

Her first experience with Tankathlon was harsh and desillusional as her team was decimated by Jajka and Bonple High School. Feeling her team discouraged and humiliated by this defeat she requested Shizuka Tsuruki's help in a fight against Anzio Girls High School. Before the beginning of the match she was pressured by Shizuka, saying if they lose their the match their Sensha-Dō Team will be disbanded, forcing Aung and her team to give their best.

During the match, Aung first followed Shizuka's advice but after her team's morale raised up, she gained more self-confidence and rushed to Anzio's flag tank while Shizuka acting as a bait. But the high-spirit was short-lived, when her team fall into Anchovy's trap and was annihilated by a CV.33 armed with an automatic 20mm gun. She and her team burst into tears when their Sensha-Dō Team was disbanded but their cries were short-lived too as Shizuka announce the rebirth of their club. Shizuka's words and the public cheers fill her determination.

She then participates another match against Bonple on their grounds. She used her newly acquired confidence to be more than target practice to Bonple, her team was ultimately beaten not without inflicting some loss to her opponent. According to Jajka, Aung have still a long way to go but she had surely grown, giving Aung even more confidence.

She is seen participating the Tankathlon Cauldron Tournament, in the name of Tategoto. She fights during the third match of the first round Nibelungen Team during an ahhihilation match. Aware of fighting Maho Nishizumi, she used all her tanks machine gunners as scout to triangulate Maho's Panzer II, but even with that all her tanks including herself were destroyed without firing a single shot and never noticing her opponent. She will then fight under Maho's guidance as a member of Blue Team. 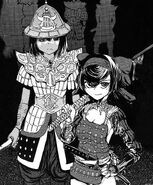 Aung and in the form of generals.

Centipede United.
Add a photo to this gallery
Retrieved from "https://gup.fandom.com/wiki/Aung?oldid=64829"
Community content is available under CC-BY-SA unless otherwise noted.